Six-legged dragon made of stuff found at the dorms

While other Chinese New Year events took place from 5 – 7 Feb, ours was held today so that the students had enough time to get the shows ready.

First, the kindergartens showed several traditional Chinese dances with folding fans. Then, the dance club students performed mixed dances of Thai and Chinese origins. The show continued with performances by the children dressed in heroic characters from Chinese folklore. Among all these characters out came the six-legged dragon. The dragon slithered about and off the stage towards the audience. Some small kindergartens in the audience screamed, running away to hide behind the Dumpling station, which was one of the other stations, such as Calligraphy, Mask Colouring and Tea Making.

That afternoon, these stations would then let the children try out Chinese calligraphy, tea or dumplings.

To Be Number One, an All-day Workshop (7 Feb)

To Be Number One is a foundation launched by Princess Ubon Rattana, whose brother is the current King of Thailand. Through TBNO, Princess Ubon has promoted various creative projects designed to educate and empower young Thais to fight against drug abuse. Highly popular, this time TBNO selected Yaowawit as a pilot project.

Organised by officials from Phang Nga province, TBNO recruited health practitioners from hospitals as workshop presenters. The participants were our students—60 of them—from Primary Grades 4, 5 and 6. The activities were based on the guidelines TBNO provided.

Fun and creative, the activities required active participation from the students. For example, Dancercise (a combination of aerobics and health dances alongside pop music) was done in each session—morning and afternoon. As the students were divided into groups, each group also had to perform a show or a unison dance. At the end of each activity, the presenters gave talks on the dangers of drug abuse and other preventive information. Besides dances and performances, the students were also given opportunities to express opinions on topics related to drug abuse prevention. Chaos in front of the goal

For two consecutive years, Yaowawit had won the football tournament, which was held at Kapong School this time for almost a week.

The finalist teams were Yaowawit and Ban Bang Keao School. The final match took place at 1 pm, when the sun was still high. Although the heat seemed unbearable in the open, it did not seem to affect the eager student spectators, who were out and about, cheering their different teams. However, adult spectators hid under the shades and trees, where our cheering team was also sitting, and yelled their support from there.

Having practiced regularly every week, Yaowawit’s football team moved effectively by controlling the game from the very beginning. After several missed shots, the first goal resulted amid a chaos in front of the goal. And the second goal occurred early in the second round.

Although more missed shots happened afterwards, the players on both sides were just too tired to chase the ball under such a glaring sun. In the end, Yaowawit won with 2:0 and defended the championship trophy.

A group of twelve students (most had never been to Thailand before) arrived at Yaowawit—welcomed by the sun, bright sky and green hills all around them. (Hours ago, they were in winter in a big city.)

BIS’s students quickly felt at home especially after playing with the kindergartens, who always had much energy and laughter for new friends. The highlight of the visit was the projects. The first project was a garden house in the farm. Initially, the garden house was just a roof, and BIS’s students constructed the rest—bamboo sections and brick walls. The second project was on an irrigation ditch beside the greenhouse. BIS’s students moved crushed stones into the gabions along the ditch bank. The third project was on the renovation of the roadside sign. BIS’s students replaced the sign roof and repainted the sign letters to make them clearly visible for people driving by.

BIS’s other extra programmes were with the children, such as tutoring, singing along, preparing Thai cuisine, swimming and meditating at a Buddhist temple.

We hope this Yaowawit’s experience will flourish when BIS’s students return to their communities. 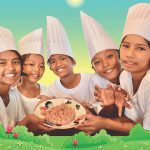 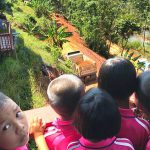