The hubbub quieted down as the kindergarten kids sat in a circle, where their classroom teacher and volunteer teachers also sat. As usual, the class begins with kids standing up and introducing themselves one by one in English. Thin, raising his hand, shouted he wanted to be the first.

He said his name, school name, and birthplace loudly. But he only mumbled about his hobby because it changed again. Last time, it was running. And this time, it was not clear. Was it drawing? Walking? Or crawling? The class heard only the “ing” part but not the beginning of the word. After some discussion with him, it turned out what he really meant was “talking”.

Thin was not always like this — talkative. When he first arrived at Yaowawit, he played alone in the corner and did not talk to anyone else. If others came to join him, he would be rough with them — pushing or biting them. He bit his classroom teacher, volunteer teacher, and some friends. Not that he did not like them, he did. He was grinning and laughing but was too excited to play with others.

When Thin was one year old, he lost his mother to a car accident. And because his father’s whereabouts were unknown, he stayed with his elderly grandmother, who could not afford to take care of him. Since then, he was often left alone at home until he was admitted into Yaowawit.

Thin is one of other kindergarten kids who have similar disadvantaged backgrounds at Yaowawit. Like any other kids in the world, Thin deserves support to have a happy childhood and an opportunity to good education.

To support Thin or his other kindergarten friends, contact us at sponsoring@yaowawit.org.

The students celebrated Dhamma Day at Nai Not Temple, one of the highly revered temples in Kapong District that has blessed Yaowawit since its inception.

In Buddhism, Dhamma Day is the first day Buddha spread his sermons to his disciples after his enlightenment.

Our students have been to the temple on many different occasions. For example, the high school students volunteer to clean and paint the temple. And during school breaks, some students even stay at the temple for several weeks for their Buddhism learning sessions.

This involvement is part of Yaowawit’s contribution to the local community. Kru Silvia worked with the children and took part in school and farm activities for two weeks. In Grade 4 and Kindergarten, she taught English. And in the farm, she collected soil, prepared packs of seedlings, and planted some mature seedlings. Additionally, as it was now a fruit season in the region, she also got the opportunity to pick mangosteens and rambutans from our trees around Yaowawit’s school grounds. Outside Yaowawit, she also visited popular beaches and places, which are mostly an hour or so away from Yaowawit.

Kru Silvia was the first volunteer from YesEuropa. Her experience, we hope, will inspire more volunteers from the organization to stay with us and work with the children.

If your organization also wants to work with Yaowawit, please contact us at info@yaowawit.org.

A group of seven volunteers from Kolping organization took part in our social work programme customized to suit the three weeks of their stay at Yaowawit Lodge.

After they got to know the children through various ice-breaking games, they began to join school activities as teachers. Some of the group helped teach in kindergarten. Others taught in different primary school classes including English and music practices.

The group also took outdoor activities in the farm. There the volunteers could get some sun (only some days as it was still in the rainy season) and had their hands dirty when they used soil to prepare seedlings and dug holes to plant mature seedlings in the gardens. Additionally, they also helped pick fruits (mangosteen and rambutan) from the trees not only those in the farm but also those from around the school grounds. Outside Yaowawit, the group also visited beaches, waterfalls, and local markets in the area.

If your organization also wants to work with Yaowawit, please contact us at info@yaowawit.org.

In the event, Yaowawit’s students performed several shows, such as plays, games, traditional songs and dances, and Thai dress fashion show. Aside from those performances, everyone at Yaowawit was obliged to wear Thai-styled dresses in appreciation of Thai culture and the children who were celebrating it.

Thai Language Day is one of many other culturally related events that the children celebrate regularly every year. Some of such events are also celebrated in big scales with hundreds of people, other schools, or other villages in Phang Nga’s region.

If you want to visit the children during one of such events, please contact us at info@yaowawit.org.

Yaowawit’s family along with the children held a birthday celebration for HM King Maha Vajiralongkorn, also known as King Rama X, the current King of Thailand.

Members of the Scout group arranged decorations of the King’s portrait on the stage and led the ceremony with national anthem and songs for the long live of the King. Afterward, one by one, the attendants paid their tributes to the King by bowing and kneeling before the King’s portrait. Then they signed their names and wrote birthday goodwill messages in the school’s registrar book. 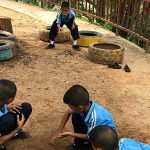 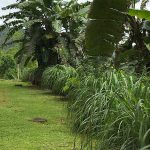